«I myself dared to pass the doors of the Necromancer in Dol Guldur, and secretly explored his ways, and found thus our fears were true : he was none other than Sauron, our Enemy of old at length taking shape and power again».
–The Fellowship of the Ring

A thousand years after The One Ring was cut from Sauron’s hand, banishing the Dark Lord from the Circles of the World, a shadow fell upon Greenwood the Great. Men renamed the forest Mirkwood and feared its interior. The Wise (the Wizards and the chief Eldar) discovered a stronghold had been built at Dol Guldur. A Nazgûl was thought to have survived the defeat of Sauron and to have come to the fortress. Dol Guldur grew in power, and many dark things stirred in Middle Earth that had been sleeping since the Last Alliance of Men and Elves. The Wise could only guess that the Dark Lord himself had returned. Yet without proof, the White Council will not act. Someone must go to Dol Guldur and investigate. If Sauron has returned, he must certainly be looking for his One Ring. With it, he would rule all of Middle-earth. Now is the time to foil his plans !

Your Wizard must form a company and enter Dol Guldur. He must also gather the other Wizards and convince them that the Necromancer is Sauron. Yet even if Sauron is driven out, he may return and grow again. If you can call together the White Council and attack Dol Guldur before Sauron finds The One Ring, you will have won a significant victory for the Free Peoples.

As a solitaire scenario, Guise of the Necromancer requires one player, who will be referred to as «you» hereafter. You will construct two decks from your collection of Middle-earth cards : a deck of hazards and a deck of resources and characters. Several cards are called for that you may not have in your collection. Please do not let this keep you from playing. Instead, use cards you do have to represent those cards you do not have. Of course, you will need to determine the text of any unavailable cards. If any rule is not addressed in the text below, standard rules are assumed to be in effect as given in the Middle-earth : The Wizards rulebook. For example, no more than three copies of a non-unique card may be included in your decks.

This scenario takes you on two very dangerous journeys into Sauron’s stronghold of Dol Guldur. In fact, it is very difficult to defeat the scenario the first few times you play. Tough decisions will need to be made as you play and construct the decks. The initial challenge will be simply surviving the scenario and reaching your final goal before the minions of the Dark Lord find The One Ring. After you have played several times and have devised tuning strategies and play tactics to defeat the scenario, you will be challenged with attaining higher degrees of success as given by the total marshalling points you gather. A table is included in the Victory Conditions section that lists different plateaus of success whereby you can gauge your achievement. Construct both the resource/character deck and hazard deck to maximize your success with the scenario.

The game is driven by a time-keeping mechanism, which is the hazard deck. You lose the game immediatly when the last card from the hazard deck is drawn.

Saruman is placed off to the side. He will not enter play until after the first journey to Dol Guldur is completed and The One Ring appears.

To start the scenario, your Wizard character (which cannot be Saruman) and up to three other non-Wizard characters are placed in Lorien. You may start with two non-unique minor items. You have only 5 general influence at this point, but you do have the normal 10 direct influence as given on your card. You may use this direct influence to control characters in the starting company. Once the first journey to Dol Guldur is completed, your pool of 20 general influence will be restored.

Additionally, a location deck will need to be constructed. This must contain Lorien, Dol Guldur, Isengard, and any number of other non-haven sites up to a maximum of six that you desire (only one copy of each non-haven site may be included). You may also include any number of havens and regions that you like. Note : the sites you include will dictate part of the construction of your hazard deck.

Once The Investigation is concluded, shuffle both sideboards into their respective starting decks. Discard piles are not shuffled into the decks. Return any sites from the resource discard pile to the location deck.

Once The Investigation is concluded, you, as a Wizard, have your 20 general influence restored.

The Resource/character Starting Deck and Sideboard :

In your resource/character sideboard you must include at least one Wizard who is neither yourself nor Saruman and at least one Elf Lord (Cirdan, Elrond, Galadriel, Thranduil, or Glorfindel II).

None of the Elf Lords may be included with your starting characters or in your resource/character starting deck.

Among your starting deck and your sideboard, you must include at least two Rescue Prisoners. You may want to include three, though, which is the maximum number of any non-unique card that may be included.

Otherwise, any resources or characters of your choice may be included in the resource/character starting deck and sideboard. Any effect that causes your opponent to reveal cards from his hand is ignored.

The Hazard Starting Deck and Sideboard :

Include three Nazgûls in addition to the creatures in the hazard starting deck keyed to sites.

With these conditions met, the remainder of the hazard starting deck may be comprised of any hazards you choose. The total number of hazards is 30.

In the hazard sideboard, include two copies of The One Ring. The actual text of The One Ring card is not used for this scenario. When these come into play, they represent the reappearence of The One Ring in Middle-earth. Though they come from the hazard deck, they are considered resource permanent-events. Feel free to substitute these with copies of Gold Ring items.

* There is no opponent’s turn, only your turn.

* Your base hand has five cards. If The One Ring is in play as a resource permanent-event, your hand size is increased by one.

* All rules of the Hazard Hand and Hazard Play (see below) are implemented during your movement/hazard phase (and could affect your site phase).

* Dol Guldur has three automatic-attacks that replace those given on its site card :
Orcs --- 4 strikes with 8 prowess
Undead --- 3 strikes with 9 prowess (each character wounded must make a corruption check)
and Trolls --- 2 strikes with 11 prowess

* Spells are removed from the game instead of discarded.

Any immediately playable corruption cards (not The Pale Sword, for example, which requires a Nazgûl attack) are played first (before creature attacks). These are played from their revealed position in the hazard hand from right to left.

A hazard short-event or a corruption card is a dud if it had no possible target face up in the hazard hand or in play upon which it has a mechanical effect. The One Ring and Nazgûl are never duds. A hazard creature is a dud if it cannot attack the company either keyed to the company’s site path or to its new site (if company is moving) or to its site of origin (if company is not moving). A hazard creature that otherwise cannot attack a company might be made to attack the company if the proper hazard event is face up. This does not make the creature a dud, but it may be the only means of insuring the event is not a dud.

Any effect that causes manipulation of the hazard deck is ignored and considered to no affect play. An example is the short-event function of Mouth of Sauron. However, you can attack with this card as a hazard creature.

Whenever the first copy of The One Ring is revealed from the hazard hand, immediately place Saruman at Isengard from his out-of-play position. He will be in play and form a company at the start of the next turn. He is an allied Wizard – all rules of allied Wizards given previously apply to him. At this time, randomly select nine cards from the hazard discard pile (if available) and shuffle these into the hazard deck.

If a Nazgûl is revealed, it will attack the company if possible. If it cannot attack, it becomes a guardian of Dol Guldur. This means the Nazgûl is put into play as a hazard Nazgûl permanent-event, and Dol Guldur receives an additionnal automatic-attack using the Nazgûl’s creature stats, which is to be faced after Dol Guldur’s listed. Nazgûl do not have their normal permanent-event abilities as given on their cards for this scenario. If The One Ring is in play at the end of the same turn a Nazgûl guardian is in play, and if both were in play at the start of the same turn, you lose the game. This means the Nazgûl has found the ring and is taking it to its master. If a Nazgûl is designated to be discarded for any reason, it is instead shuffled back into the hazard deck. Of course, a defeated Nazgûl is placed into your marshalling point pile.

You win immediately if a company containing yourself, Saruman, another allied Wizard, and one of the Elf-Lords moves to Dol Guldur, faces any automatic-attacks, and successfully plays Rescue Prisoners. This means Sauron has been driven out of Dol Guldur. The group is called The White Council.

You lose if one of the following happens before you have achieved victory :
- the hazard deck is exhausted
- you are eliminated (or Saruman is eliminated, thus preventing the formation of The White Council)
- The One Ring and a Nazgûl guardian are both in play at the end of any turn at the start of which both were also in play

Thanks to YeGor, from the BGG forum
Top

Guise of the Necromancer : a sample deck

Off to the side :
1 Saruman

Dol Guldur for this scenario : 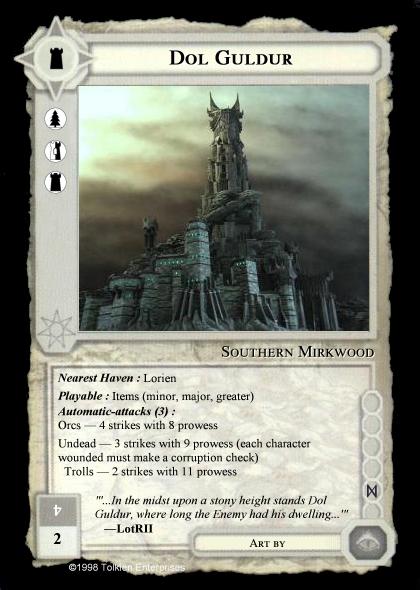 Thanks for posting all of these.
I just started playing this game again after ten or so years.. I had them sitting in my parent's house in a box someplace.
I will be playing almost entirely solo games, so these are fantastic.
I actually have a copy of "A Long-Expected Party" from way back when...
I will try to upload the other scenarios in it sometime soonish.
Thanks again
Chris
Top
Post Reply
4 posts • Page 1 of 1