A Scenario from A Long-Expected Party

"It was in the beginning of the reign of Malvegil of Arthedain that evil came to Arnor. For at that time the realm of Angmar arose in the North beyond the Ettenmoors... The lord of that land was known as the Witch-king... who came north with the purpose of destroying the Dúnedain of Arnor, seeing hope in their disunion.... " - Return of the King, p. 397

The shadow of Angmar ever looms over the lone kingdom of Arthedain, darkening its northern reaches with the threat of war. Each spring the howling of wolves heralds the coming of the hordes - vile Orcs, great Trolls, and fierce Angmarean warriors - all held in thrall by the dark might of the Witch-king. Portents say this spring's raids will be the worst for many years, and the nobles of Arthedain fear that the power of Angmar will prove too great to be resisted. Thus they have called for the bravest adventurers to make their way onto the harsh plateau of Angmar, to spy out its citadels, to count the numbers of the enemy amassing on Arthadan border, and to return with that intelligence to Fornost Erain.Perhaps when armed with the knowledge of the threat they face, the lords of Arthedain can muster enough resistance to survive the Witch-king's onslaught.
You have three months before the coming of the spring - three months to gather your intelligence and wend your way back into Arthadan lands, and make your reports to Fornost.
Spies for Arthedain is a solitaire scenario.

DECK CONSTRUCTION :
You will need the following:

1. A starting company, which should consist of:
· no more than 5 characters, with a total mind not to exceed 20. No Wizard characters may be chosen;
· two starting non-unique minor items.

2. A resource deck of 36 cards. This deck should include:
· 6 to 8 Dark Numbers;
· up to 3 additional characters, with a total mind not to exceed 15;
· other resources as you wish, with the following limitations: you may include no more tha one of any unique card, and no more than three of any non-unique card.

3. A hazard deck of 36 cards. This deck should include:
· 24 creatures: 14 keyable to Shadow-land or Shadow-hold, 5 keyable to Dark-domain or Dark-hold, and 14 keyable to Wilderness, double Wilderness or Ruins and Lairs. Most should be Orcs, Trolls or Men;
· 12 events of your choice. The following events would be especially appropriate for this scenario: Angmar Arises, Arouse Minions, Awaken Minions, Clouds, Doors of Night, Doubled Vigilance, Incite Minions, Minions Stir, Morgul Night, Rank Upon Rank, Redoubled Force, Scorba Ahunt.

Resource and hazard decks are kept separate for this scenario.

The company of spies begins play at Fornost Erain. the player draws a resource hand of 5 cards.

Untap Phase: As in Standard Rules.

Organization Phase: As in Standard Rules.

Long-event Phase: As in Standard Rules (but see below for Special Rules).

SCENARIO OBJECTIVES :
Play Dark Numbers after facing the automatic-attack at each of the following Angmarean citadel sites: Carn Dûm, Eldanar, Morkai, Angsûl, Shedûn, Mount Gram.
Return as many Dark Numbers cards as you can to Fornost Erain before 9 turns (your 3 months) have elapsed.

Corruption : No corruption checks are required during this scenario, even when transferring items between characters.

Dark Numbers : You may include between 6 and 8 Dark Numbers cards in your resource deck. For this scenario, Dark Numbers may only be played after a company has faced automatic-attack at one of the Angmarean citadel sites: Carn Dûm, Eldanar, Morkai, Angsûl, Shedûn, or Mount Gram. Dark Numbers need not remain under the control of the scout who brought it into play. Any character in the company may carry any number of Dark Number cards. When a character is killed, any Dark Number cards he controls may be transferred to one or more characters in his company.

Marshalling Points : Marshalling points do not count for this scenario.

Site Cards : Please use the following modifications to the site cards for this scenario:
* Use Dead Man's Dike for Fornost Ersin (it has not yet fallen into ruin). Consider the site a Border-hold, and ignore the "Playable", "Automatic-attack", and "Special" notations on the card.
* Use Morkai for Angsûl and Shedûn as well (all three sites are essentially the same for the purposes of this scenario). For Angsûl and Shedûn, ignore Morkai's "Special" notation.

Re: Spies for Arthedain

Here are the images of the special sites for this scenario : 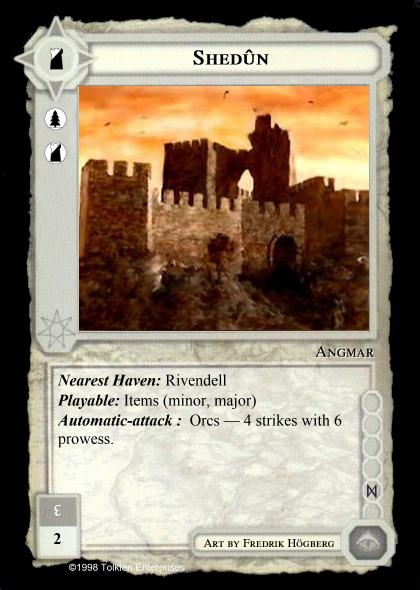 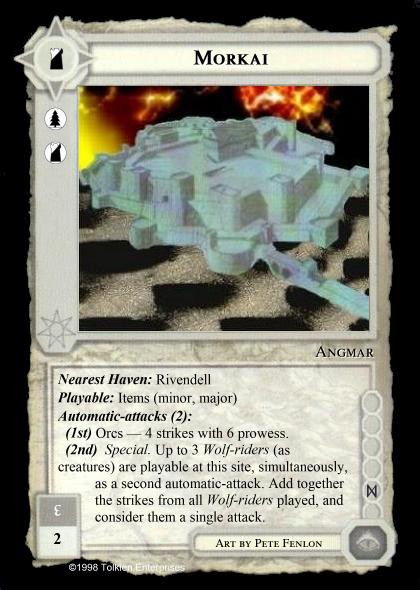 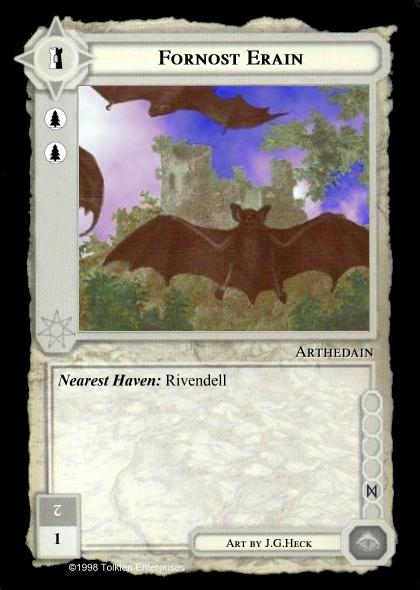 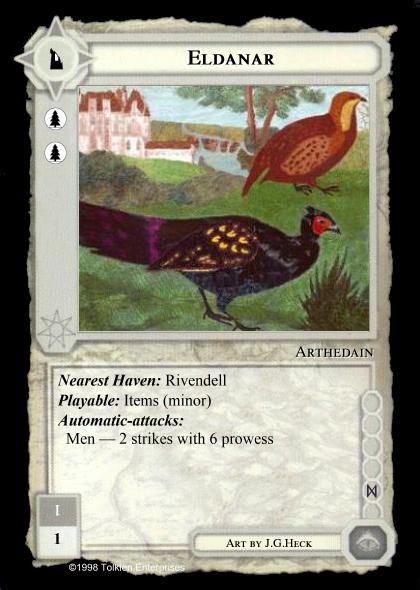 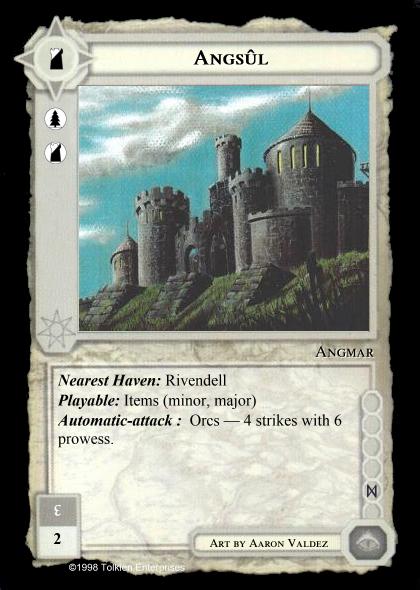