The place to ask all rules questions related to MECCG.
Post Reply
25 posts

Wizard's Trove says "Ignore the text of The White Tree." ICE Ruled that the "Unique" keyword IS ignored. The CoE was not aware of the ICE ruling and ruled that "Unique" is NOT ignored. How you all play?

ICE Digest 81 wrote: [White Tree/Wizard's Trove Questions]
>WT says to ignore the text on WT when using WT to play it. Does this include the Sage requirement? The discarding of the Sapling?

All three, assuming the FW is playing the White Tree with Wizard's Trove in all three cases.

CoE #63 wrote:And then I wondered: since the text of the White Tree is ignored, is it also no longer unique? So can both players bring it in play?

*** That is correct. Once The White Tree is in play under Wizard's Trove, it is no longer unique

CoE #65 wrote:Travis Took was kind enough to find this:
The "Unique" keyword is not ignored on The White Tree if Wizard's Trove is used to play it. Ruled By Chad in NetRep Ruling Digest 43

*** Consider this ruling correct and the recent ruling to the contrary
incorrect.

To me, it's clear that "Unique" is inside the box for the card's text, and would be ignored. 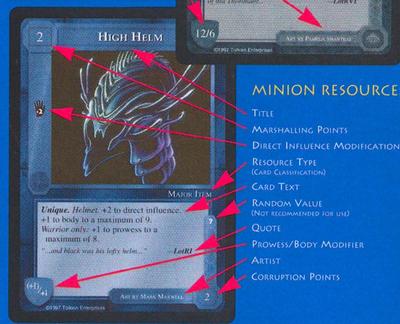 If unique card has to be played, it is checked whether its copy is in play.
If it is in play, the unique card cannot be played. Removed Unique keyword in text of the copy in play does not change the procedure, nor its result.
We will not speak of such things even in the morning of the Shire.
Top

Putting aside the rules, is that the way that you play? Do you know if others play that way as well?

I checked the rules again and I do not see the restriction: "If unique card has to be played, it is checked whether its copy is in play."

First, looking again at the rules on keywords, I notice that keywords like Unique actually are in the card's text. And Wizard's Trove says "ignore text", which includes keywords. It doesn't just reference the "effects" of a card, which is commonly done by other cards.

UNIQUE & "MAY NOT BE DUPLICATED" CARDS
If a card states that it is "unique" or that it "may not be duplicated,'' only one such card (or its effects) may be in play at a time. The first card played takes precedence (influence checks may change this). This restriction applies to all cards in play, i.e., both yours and your opponent's.
Only one of each "unique" card may be included in your play deck and starting cards combined. As an exception, two of the same Ringwraith may be included in your play deck (to give you a better chance of drawing one early).

Annotation 1: A card is not in play until it is resolved in its chain of effects.


A lot of Stage Cards require a "protected" Wizardhaven (one needs 2) but only Wizard's Trove and Guarded Haven can protect a Wizardhaven other than The White Towers or Isengard. Maybe this is the reason for ignoring "Unique."
Top

No.
Unique card cannot be played if its copy is in play.
It does not matter that the copy in play may have its text changed in such way that the keyword Unique is removed.
The check for presence of other copy in play is made from the side of the card that has to be played. The card that has to be played needs to have the keyword Unique removed to overcome playability restrictions of unique cards.

In games I have played there were no controversies about playability of White Tree in situations where other copy was in play (along with Wizard's Trove or not).
We will not speak of such things even in the morning of the Shire.
Top

Konrad Klar wrote: ↑
Fri Jan 17, 2020 6:17 pm
Unique card cannot be played if its copy is in play.
It does not matter that the copy in play may have its text changed in such way that the keyword Unique is removed.

Well, I don't see the support for that conclusion in the rules. Plus, White Tree says to ignore the text which includes the Unique keyword and ICE ruled that this was the case. I don't see enough support for the other interpretation to overcome this.

But I still wonder how people are playing it given that it seems some people know the CoE ruling but not the ICE ruling.
Top

Underline mine.
We will not speak of such things even in the morning of the Shire.
Top

Right. But Wizard's Trove says to ignore the Unique keyword. Meaning, "additional copies cannot be played" doesn't apply. And ICE ruled this way. It's not as if ICE didn't know the Unique rule. If there was some other contradictory rule that ICE seemingly did not consider, then maybe that would be sufficient to call their ruling into question. But there isn't. It's not as if cards are written to have their own effects fizzled due to some rule contradiction.
Top

Regardless of whether or not the text containing "Unique" is ignored on the copy of The White Tree already in play with Wizard's Trove, the next copy to be played will still contain the "Unique" keyword, at least at declaration, and so it's play would be blocked by the "only one copy of the card may be in play at a time" clause of the rule. I believe this is consistent with Konrad's stance. In other words, so long as one of the copies in question has an active "Unique" keyword, both can't be in play at once.
Top

Putting that aside, I don't see how the underlined Uniqueness statement would prevent 2 Fallen Wizards from both playing White Tree using Wizard's Trove since both would ignore Unique. Rules on the Unique keyword don't apply to cards that are not Unique.

I can understand people just accepting the CoE position as how to play if that's all the knew. But I find no sufficient argument to overcome the ICE ruling.

My impression is that the unique keyword has often been given special meaning beyond the original rulebooks. This has long been contentious. Examine, for example, Long Dark Reach rulings.

"Remember, NetRep rulings are official. This does not necessarily mean they are correct." - Bandobras Took
It is not our part here to take thought only for a season, or for a few lives of Men, or for a passing age of the world.
One [online community] with hammer and chisel might mar more than they make... Cautious skill!
Top

Here's the problem: a CoE ruling that is contrary to the ICE ruling but that does not consider or address the ICE ruling is against CoE Charter III(b).
Top

I'm not sure what you're referring to. The Charter was amended several times since CoE #43. The Annual Rules Vote mentioned in the current Charter didn't exist until 2018.

As for "Out of respect for ICE's legacy no new (non trivial) errata will be issued, nor will any rules from ICE's last CRF be overturned," note that rulings that didn't make it into the CRF were never protected! And these days, all of that has been thrown in the rubbish anyway, "to keep the game alive for each and every one’s enjoyment" (that is, if you enjoy Schism and Arguments!), with e.g. CoE Clarification[Errata] #6, etc, etc. (Or maybe "trivial" is too subjective?)

Hypothetical effect that would turn a non-unique card into unique would not be stopped by "only one copy of the card may be in play at a time".
Similarly maximal allowed size of company outside Haven cannot stop an effect that turns a Wizardhaven into non-haven site.
Above limitations are too weakly protected (from being violated/exceeded) by rules, unlike company's composition limitations.
We will not speak of such things even in the morning of the Shire.
Top

Konrad Klar wrote: ↑
Sat Jan 18, 2020 9:17 am
Hypothetical effect that would turn a non-unique card into unique would not be stopped by "only one copy of the card may be in play at a time".

Discarding Wizard's Trove is not hypothetical, but it unlikely will cause a phenomenon of multiple of copies of the same card in play, where at least one of the copies is unique.
We will not speak of such things even in the morning of the Shire.
Top

But Wizard's Trove says to ignore the Unique keyword. And so the Unique rules don't apply.
Top
Post Reply
25 posts