The place to ask all rules questions related to MECCG.
Post Reply
96 posts

The target of the card is the character, not the spider attack (although obnoxiously the card has an implicit "facing a strike from a spider attack"). The "character facing a spider attack" is the same character. Maybe this discussion should be moved to a card-specific thread.
It is not our part here to take thought only for a season, or for a few lives of Men, or for a passing age of the world.
One [online community] with hammer and chisel might mar more than they make... Cautious skill!
Top

Where are you quoting from?

Taking a prisoner is not a result of combat, it is the result of a card effect. The definition of Hazard Hosts in MEDM mentions nothing about combat being required. While particular Hazard Hosts may happen to require combat in order to trigger their prisoner-taking effect, they are separate concepts, and prisoner-taking is not combat nor a component of it.

That what happened to a character in result of successful strike counts as in result of combat. Does not?
We will not speak of such things even in the morning of the Shire.
Top

Good discussions. Following your lead in splitting off: viewtopic.php?f=16&t=3246#p26716
It is not our part here to take thought only for a season, or for a few lives of Men, or for a passing age of the world.
One [online community] with hammer and chisel might mar more than they make... Cautious skill!
Top

Underline is mine. This doesn't seem right.

CRF wrote:Dragons
Dragon automatic-attacks are not considered manifestations of any unique Dragon.
If a manifestation of a unique Dragon is defeated, then the automatic- attack at the associated site is removed, and that site therefore loses its hoard status.
If you defeat the attack from a Dragon manifestation, you get kill marshalling points from the manifestation as if you had defeated a creature.

You're right; the rule referenced on page 42 is bulleted and therefore only applies to RWs (and Balrog).
Remember, NetRep rulings are official. This does not necessarily mean they are correct.

You probably aren't playing Fallen Wizards correctly. This prompted the backlash erratum that I will link to as soon as I notice it is officially posted.

If a hero company defeats an attack which was created from a recruited minion dragon faction, then the minion player loses those faction points and the hero player gains those points?

If a minion company defeats an attack which was created from a recruited dragon faction, then that company's player does not receive any kill points BUT the player who recruited the faction still loses his faction points?
Top

Right.
Remember, NetRep rulings are official. This does not necessarily mean they are correct.

You probably aren't playing Fallen Wizards correctly. This prompted the backlash erratum that I will link to as soon as I notice it is officially posted.

This document was great 9 years ago and it still is today. Especially with the wonderful formatting by Annatar.

But I was wondering if the URD had been updated with the ARV decisions from last year. It seems like it has not.

Also, was there ever any resolution of whether the URD is "official" or not? (Sorry if this brings up past arguments). And was it ever updated as it was supposed to be? Seems like Brandobras has taken (forced?) his hands off the project.

It seems that Brandobras has been away from the forums for a bit. But he posted a link to a Google doc (I can't see revision history). So I could use that for my notes. But then I wonder why some errata/clarifications were included in the URD and others were not (obviously the whole digest is too large to include in it's entirety).

It could just be that people are busying playing in their limited free time instead.
Top

The current URD is not an official rules document, but it is a handy reference. There are some mistakes in it. It also has not been updated in quite some time.

As I’ve mentioned elsewhere, I am currently working on a new URD to be released which will be reviewed by the ROC and will be an “official rules document.” The document will also be current and kept up to date with newly issued clarifications and errata. Annatar has also graciously agreed to continue his work with formatting the new document.

I was hoping to finish it last year, but it has turned out to be much more time intensive than I had originally thought. I’ve put about 80 hours into it thus far and it’s still far from being finished. It will incorporate past relevant Rulebooks, CRF, ICE Digests, and NetRep Digests. It is meant to be a “one stop shop” for MECCG rules which I think would be a wonderful thing for the MECCG community.

The new URD will be a very different document than the current version so it’s more of a new manual than just an update to the old. It will still include many similarities though to the original document. All of this is being done with Bandobras Took’s blessing.

I’m very excited about this project but also overwhelmed with the immensity of the project (if a quality product is to be achieved).

So stay tuned to hear more on this. I’m guessing it won’t actually materialize until late this year. The ROC will be saturated with work until June with the upcoming 2019 ARV.

the Jabberwock wrote: ↑
Tue Mar 19, 2019 12:32 am
It will incorporate past relevant Rulebooks, CRF, ICE Digests, and NetRep Digests. It is meant to be a “one stop shop” for MECCG rules which I think would be a wonderful thing for the MECCG community.

Amen to that! Thank you for all of your and the rest of the team's efforts to pull this together -- it's something that the community has needed for a very long time, I think.
Top


Rules Digest 536 wrote:Subject: Re: unOfficial MECCG-L FAQ
>
>Great Goodledy Moogledy!!! I just printed off the "Rulings
>by Term" and the "Card Errata and Rulings." Thirty-six,
>count 'em, THIRTY-SIX pages. This isn't counting the
>"Rulings by Turn Sequence,"
>
>So all I need to do to be prepared for the next game I
>play is study this Tome, memorize 36 pages of info, and
>hope that it doesn't change before my next game.
>
>Unfortunately, I have a life. What's a feller to do?

I do paper crafting for fun (various boxes, tuck boxes for cards, game inserts, etc). This is my first bound book. Thanks again to Annatar for the beautiful formatting, and to Brandobras for his efforts in compiling and editing.

Today I learned: finding decent quality A4 paper in the U.S. is more difficult than finding cards from The Balrog. 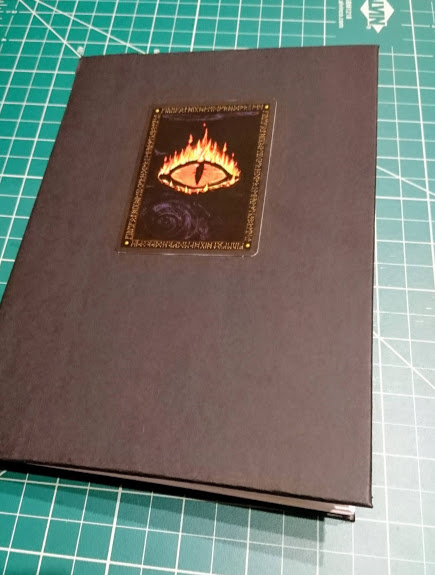 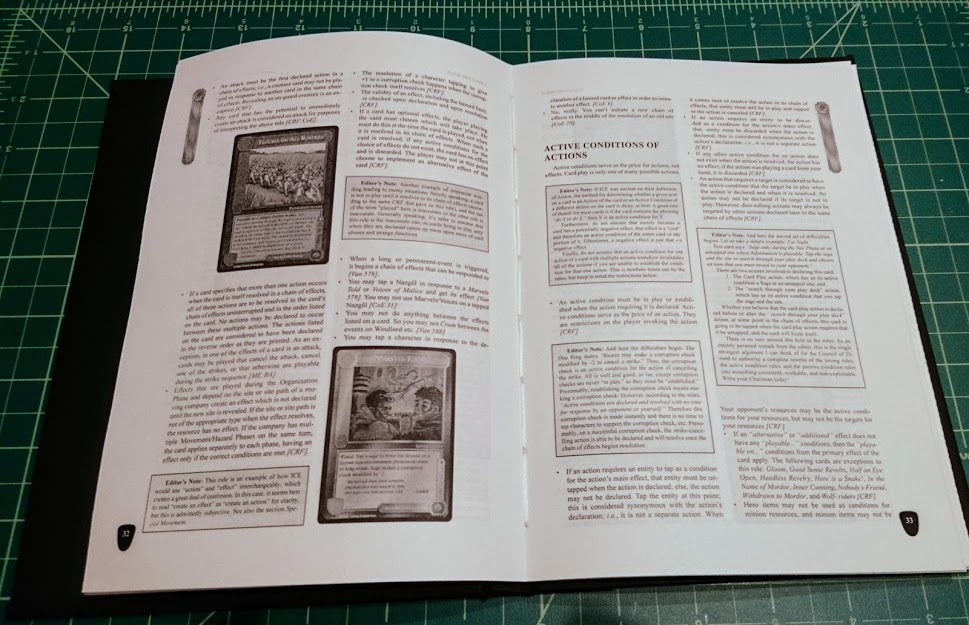 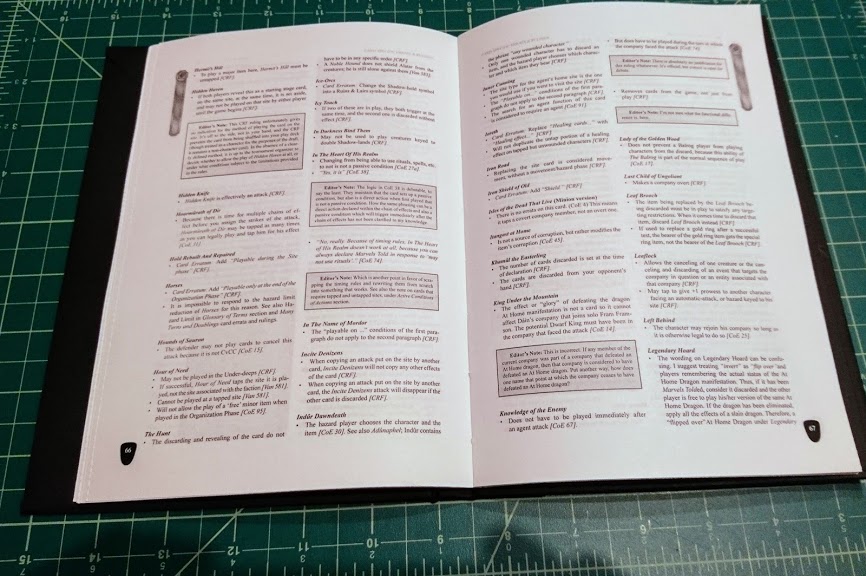 That's quite nice. I printed mine out and keep it in a binder with sheet protectors, but your way seems more fitting for something of this bulk and significance. Very cool.
Middle Earth and other CCG unboxings, booster openings, and guides: https://www.youtube.com/c/TheCCGCollector
Top

Nice. Where can we get this pdf version with illustrations ?
Top

Nico, the pdf is attached on a post by Annatar a few pages back in this same thread.